How to avoid a vet visit at Christmas 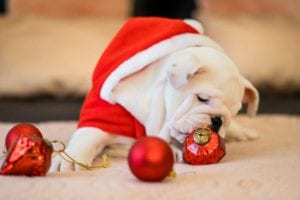 Recently, we saw a young cat in our hospital who had eaten a piece of string. He came in not feeling well, vomiting and not eating. When we performed x-rays and ultrasound, we found a piece of string stuck inside him that stretched all the way from his mouth, down his throat, into his stomach and down into his intestines. Luckily for this little guy, his parents asked us to do the life saving surgery he needed to have the string removed and he was home in time for Christmas.

Pets eating things they shouldn’t is a daily problem at most animal hospitals, but the holiday time means people are busier, new things are in our households and visitors don’t always know what dogs and cats will get into the same way that their owners do, so we often see a rise in these sad cases at this time of year. Nothing puts a damper on holiday cheer like an emergency visit to the hospital, so I thought I would go to some guest authors for an article with some tips on holiday pet hazards and how to avoid them. Enjoy.

Are poinsettias as toxic to pets as many people think?

While poinsettias may cause gastrointestinal upset, such as vomiting and diarrhea, no significant toxicity is typically seen.  Dogs and cats may have a lack of appetite or stomach upset for 1-2 days after eating the leaves of a poinsettia, but fortunately, this often resolves without any medical intervention. However, if your pet is not feeling well for more than 1-2 days, it’s recommended that you bring them to your veterinarian.

Are there other holiday plants that may be harmful to pets?

Many holiday arrangements contain lilies (Lillium species), holly, or mistletoe.  Bouquets brought into the house by holiday guests should be thoroughly inspected, as lilies are one of the most common flowers used by florists. Just one or two bites from a lily can result in severe acute kidney failure in cats – even the pollen and the water that the plant is in are thought to be poisonous.

Holly berries and mistletoe can also be toxic to pets. When Christmas or English holly is ingested, it can result in severe gastrointestinal upset, thanks to the spiny leaves and potentially toxic substances found in the plant (including saponins, methylxanthines, and cyanogens). If ingested, most pets smack their lips, drool, and head shake excessively due to injury from the spiny leaves.

As for mistletoe, most of us hang it high enough that it’s out of reach of our pets. Nevertheless, it can also be toxic if ingested. Thankfully, American mistletoe is less toxic than the European varieties. Mild signs of gastrointestinal irritation may be seen, although if ingested in large amounts, collapse, hypotension (low blood pressure), ataxia (difficulty walking), seizures, and even death have also been reported.

My pet loves to play with the Christmas decorations. Is this safe?

While it is hard to resist the temptation of sparkling lights and glittering tinsel, these items can be very hazardous to pets. If your pet ingests tinsel, it can become lodged in the intestinal tract and cause a linear foreign body to develop.  Correction for this includes costly surgery and, in severe cases, serious complications can arise.  Many animals enjoy chewing on electrical cords from tree lights, or biting the lights themselves.  This can result in electrical burns to the mouth and tongue and other complications from electrocution.  Your homemade ornaments can also pose a risk. Homemade ornament dough is high in salt, which may cause electrolyte abnormalities and seizures. Hang these decorations high on the tree or pets may think they’re meant for them!

What foods are most problematic to my pet this time of year?

With the holiday season comes a delightful variety of baked goods, chocolate confections and other rich, fattening foods. However, it’s not wise, and in some cases, quite dangerous, to share these treats with your pets. Foods that can present problems include:

Is ice melt safe to use in the same area that pets are around outside?

Ice melt is commonly used around entryways and sidewalks.  For convenience, containers that are filled with ice melt granules are often left within a pet’s reach.  There are numerous formulations available and small exposures typically lead to stomach upset and possibly dermal and paw pad irritation. Many of these products are salt (sodium) based. If ingested in large amounts, electrolyte abnormalities may occur which can result in seizures and brain damage.  If your pet has consumed any amount of ice melt, it’s important to call Pet Poison Helpline or your veterinarian immediately.

What type of problems can occur if pets ingest antifreeze?

While antifreeze is around all year, exposure to this fatal chemical is more prevalent in the winter months, and it is important to make sure your pet isn’t ingesting any radiator coolant. Antifreeze can be found in numerous sources. In many regions with cabins that are not used frequently during the winter, it is common for people to place antifreeze into their cabin’s toilet to prevent it from freezing during the winter.  We see numerous poisoning cases at Pet Poison Helpline from dogs running into cabins and drinking out of the toilet.

Finally, there are rumors of small amounts of antifreeze in holiday decorations, such as imported snow globes. Recently, some were suspected to contain antifreeze (ethylene glycol) in the liquid. If a snow globe falls off the table and cracks open, and your pet then licks up the contents of the snow globe, there is the risk of antifreeze poisoning. As little as one teaspoon of antifreeze when ingested by a cat or a tablespoon or two for a dog, depending on their size, can be fatal.

Signs of early poisoning include acting drunk or uncoordinated, excessive thirst, and lethargy. While signs may seem to improve after eight to twelve hours, internal damage is actually worsening, and crystals develop in the kidneys resulting in acute kidney failure. Immediate treatment with an antidote (fomepizole or ethanol) is vital. Because the antidote only works if given within the first 3 hours for cats and 8-12 hours for dogs, it’s imperative that you seek veterinary care immediately for blood testing for antifreeze poisoning (including an ethylene glycol test and venous blood gas test).

Pet Poison Helpline, an animal poison control center based out of Minneapolis, MN, is available 24 hours, seven days a week for pet owners and veterinary professionals that require assistance treating a potentially poisoned pet. The staff provides treatment advice for poisoning cases of all species, including dogs, cats, birds, small mammals, large animals and exotic species. As the most cost-effective option for animal poison control care, Pet Poison Helpline’s fee of $39 (USD) per incident includes follow-up consultation for the duration of the poison case. Pet Poison Helpline is available in North America by calling 800-213-6680. Additional information can be found online at www.petpoisonhelpline.com.