The Stigma of an FIV Positive Cat

I remember years ago when I was volunteering at the Toronto Humane Society, so many great animals were ready to be adopted. Most of them were cats.  One particular room had all the FIV positive cats together away from the limelight of visitors (although this is no longer the case and they are housed together).  Many of them had been there for a long time and I can understand why, people lack understanding about FIV and were scared that they might be a lot of work to take on.

FIV or Feline Immunodeficiency Virus is a retrovirus that shares the same genus as HIV.  It is limited to cats and transmitted through bite wounds of an affected cat to an unaffected cat.  Typically it affects a small number of the cat population. Within the FIV positive cats, most are males caused by territorial behaviour.  FIV alters a cat’s immune system response and decreases their ability to fight infections.  Because of these health factors, these cats generally live in single cat households and their care can be potentially more involved than a cat who is not a carrier.  It’s a shame because ultimately this decreases any chances of successfully adopting FIV positive cats.

Merlin is the healthiest FIV positive cat I know and I can’t imagine a day without him.  He is 11 years old now and has not required any more special care than any other cat I’ve owned or had the pleasure of working with in my career.  My kids can carry him around. He has been a pillow so many times when they were learning to walk and has been the best house mate to Martin, (The cat from our previous blog post March 3, 2018) 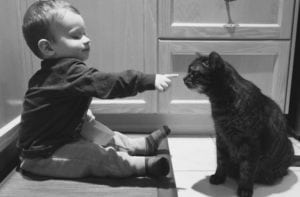 Merlin’s care has been really simple.  Merlin is strictly indoor as Martin is too.  We’ve always ensured he gets his yearly check-up and now that he is a senior, he gets an exam bi-yearly but is no longer vaccinated because of his FIV.  Since he was a young cat, it’s been important to have blood work done every 6 months to check how active his white blood cells are. So far after 11 years they’ve been great!  I believe that nutrition has also played a role in his success, ensuring his immune compromised body is absorbing the nutrients he needs.  Merlin was also very accommodating when I would brush his teeth and now that I have less time, he is gifted with a dentistry every 3rd birthday to ensure we minimize dental disease.

An FIV positive cat can have friends

Merlin had been our only pet up until 4 years ago because we thought that’s the way it had to be.  He was lonely.  We considered adopting another cat, but if we did that, would his FIV worsen? Could he bite the new cat? But…… what if everything was actually fine and he made a new friend?  Our family was willing to try it.  We tested Martin for FIV prior to bringing him home and he was negative.  He also had a really laid back personality which was a fantastic start.  We introduced them slowly in the way you would with any other cat. There were no red flags.  Watching a then 6 month old Martin chase a 6 year old Merlin down the hall and run around the house for 30 minutes at a time was so joyful. Years later the strong friendship has continued.  They play fight too (but nothing aggressive), and try to share the thin blade of hot sun that shines on the couch.  I have tested Martin, the younger cat, a few times since to ensure the virus hasn’t been transmitted and it hasn’t.  I feel really happy that there is evidence in our home, that friendly FIV positive cats can have friends and don’t have to live alone. 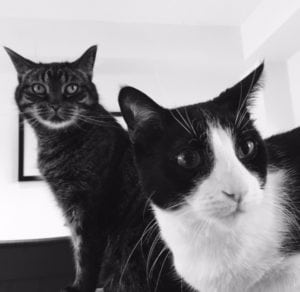 Next time you are considering adopting a cat, don’t pass up the chance to consider an FIV cat.  Maybe he or she will be the right fit for your family.  Make inquiries about the health status of the cat you are interested in and what their temperament is.  What extra care if any would be needed?  FIV positive cats are just as lovable and fantastic as all the rest.  And in our case, Merlin’s health is no more important than Martin’s, each of them bringing their own baggage home.